Da mighty Gorkanaut! Or is dis a Morkanaut? Looks like a Gork ta me…

Who doesn’t love Space Orks? I mean, other than people who like to consistently win games?

It’s been a while since I’ve posted, but I haven’t been lax. While I’ve shelved the Blood Angels for a bit, I’ve been busy workin’ on da Orks!

Orks are probably the very first strictly 40k miniatures that I ever bought, this being the old Rogue Trader era plastic boxed set. I also picked up the original Imperial Space Marines plastic set (at a Waldenbooks, of all places) But I think I bought the Orks first.

I had no interest in 40k at the time, I wanted them for games of Space Hulk.

Come to think of it, I don’t think I ever actually played a game of Space Hulk using Orks…

Hmm. But I did paint up five or six of them. And the rest sat unloved in a box.

I got into 40k somewhere around the mid-point of second edition, and started building up an Ork army from there.

I especially loved these guys: 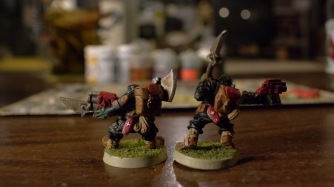 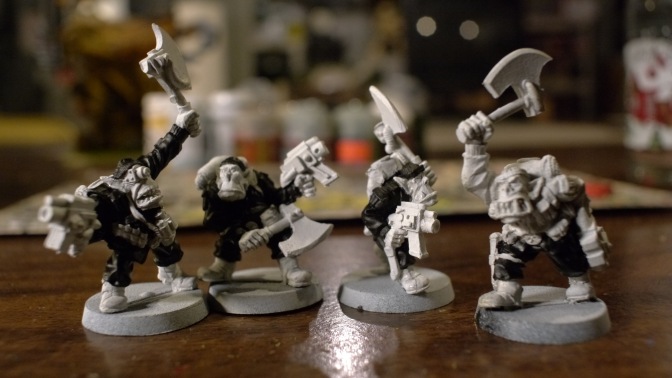 Still some of the coolest miniatures that GW ever produced, in my opinion.

Now I’m actually painting them up after sitting on them for twenty-plus years!

When 3rd edition hit, I finally picked up what I considered to be a decent Ork in Mega-armor, and finally painted him a few weeks ago. 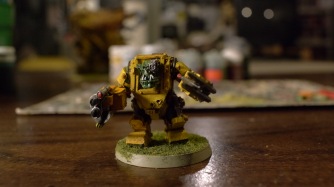 Until recently, my entire Ork army (which ranges from Rogue Trader era to present day) has been grubbing around in a mostly unpainted state.

This has been the most concerted push that I’ve ever done to get them painted, thanks partially to this whole Blood Angels project motivating me to get stuff done.